For those of you who have been following along since we began publishing the Parliament of Twilight books in early 2013, you’ve seen quite the evolution of our book covers. You know that I have always designed the covers. And those first covers were drawn by my writing partner Nevi and put into cover templates I “designed”.

They were lovely but the large paintings didn’t translate well to thumbnails and they certainly didn’t appeal to audiences who were willing to throw money at us.

So, I went to work redesigning the covers to meet the expectations of our intended market. And they were….. well…..

They were what they were. Not bad, but desperately trying to cater to a very specific audience in the M/M Romance genre while still making a valiant attempt to keep the horror element that runs through the world was hard. Sort of got it, but not really.

Our long time fans (all three of you) will also recall that the books themselves had a fatal flaw. We were writing stories meant to eventually overlap, but each story line was taking place at three different places on the time line. With overlapping secondary characters. It was getting impossible for us as the authors to keep the stories straight and I don’t even know how the handful of readers we had would have managed if our original plan of 3 or 4 books in each story arc had played out.

We did the only thing we thought we could. We re-branded, changing our label name from Wandering Stars Press (which was also the name of a comic book company anyway and was really messing up our  Google search results) to Hermit & Star Books. And we took the stories that we already had, fit them onto a single time line and began writing the missing pieces to thread them together and give more life to the secondary characters who were the backbone of the over all plot.

What came out of this re-do was the ensemble cast that we all know and love today. The stories made sense, the time line was smoothed out, and we were writing at a record pace. But the new books needed new covers. So I put myself through the process of learning a new set of tools. Something more than a photo editor and GIMP. 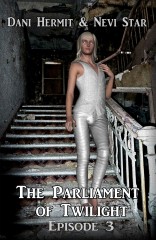 And they turned out beautifully. With amazing characters on dynamic backgrounds. The response from our readers was awesome. We’re not NYT best-sellers, but we’re regularly in the top 50 for LGBT Horror, so that’s something. And we make a few sales every month, earning enough for a cup of coffee or two.

But there was something off about the Episode 1 cover. Something that made it look out of place next to the other ones.

It was the first. I have learned many, many more tricks to making amazing renders, the program I use (DAZ Studio 3D) has been updated several times. I’ve found hours of tutorials for making my final products amazing.

After dealing with this for almost 3 years (Episode 1 released in late Feb 2015), I finally broke down and did what I swore I wasn’t going to do. I risked the endless cycle of fixing and redoing my past work to take it that elusive place called Perfection. I sat down and redid the cover from scratch. New character design for Jacob. New background. Updating the font and graphics to match the other books. 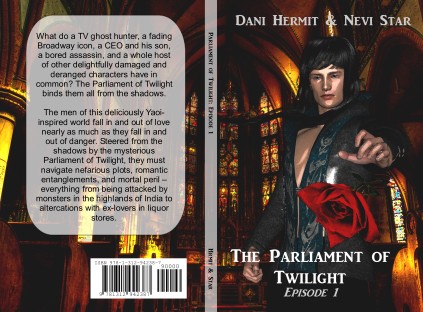 Which wasn’t BAD, but it certainly wasn’t good either. It became something else. Something new and amazing. It became this…..

And I am so much, much happier. I am in love with this cover. So much in love.

And  by the end of the weekend, this new amazingness should be posted on every site where our books are sold.

After over a year of re-writes, edits, full-stop plot holes, and feral chupacabra attacks, Parliament of Twilight: Episode 4 is ready for the public!

Officially releasing in eBook on December 18th, you can now pre-order it on either Amazon or Smashwords. Also, if you are a paperback lover, Amazon has it available now.  (And for our fans who are outside the US, you want these links for the ebook or the paperback.)

In addition to the excitement of the pre-order, we are also running a giveaway from now until the release date on the 18th. Easy to enter, easy to win spiffy prizes.

And now, back to the writer cave to work on the preparations for Episode 5! Hoping that we will be seeing the release on 5 around April or May 2018. *fingers crossed*

PS- how could I forget the free stuff? If you want to get a copy of Parliament of Twilight: Episode 1 (as well as a few other really cool books) hop over to this post on Facebook and sign up for the Queeromance Ink newsletter. Details on how to get this super cool Paranormal LGBT pack of free stuff is in the post, but trust me. It’s easy and all you need is an email.

I’m very excited to announce that that pre-order for the eBook of Parliament of Twilight: Episode 2 is available on Smashwords!  There is still some processing to be done, but it will be available on Amazon for pre-order as well in the next day or so.  Still need your copy of Episode 1?  Check out our links here for your favorite supplier of either eBook or Print editions. 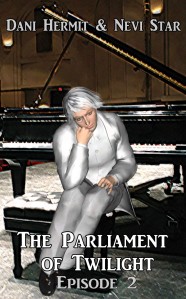 When faced with terror and assassination attempts, the men of the Parliament of Twilight must show what they are made of.

Will Brodie be able to save himself from the very real horrors of a haunted house on the fake ghost hunting show? What about the wheelchair bound assassin known as Night Owl? What is he going to do with this new partner and a mission that could prove to be impossible? Can Julian find a way to feed his demanding nature that doesn’t involve Marius smuggling prostitutes into the hospital?

And what about RT’s new romance with the much younger Kayden Miles? Will Kayden’s father prove to be their undoing or the least of their worries?

After ending day 1 with a pretty solid start and a plan that I think that I like for the rest of the month, I’m feeling pretty confident about this NaNo.  I’m proud to report that I’ve drafted two of my real life friends to the NaNo cult!  And one of them beat me out with our day one word count!  I’m feeling a bit competitive now and am going to have to end day 2 with a higher count than her. (You know who you are!)

But seriously, this is actually really cool.  I’ve been enjoying NaNo for a while and I hope that they have fun too.  And I might FINALLY get those stories out of them that they’ve been hiding for years now!

Other than NaNo, not much else to report.  Oh, we’ve been filling up our Etsy store and the Storenvy shop isn’t far behind.  We have copies of our illustrated Paperback edition of the Parliament of Twilight: Episode 1, and loads of art prints by Nevi in poster size (13 x 19), regular size (8 x 11) and postcards (4 x 6).  There are original characters from the POT series and some stunning fanarts, like these awesome Halloween pics of Ciel and Sebastian from Black Butler (Kuroshitsuji). 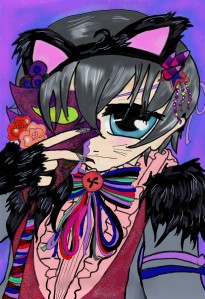