Wow, has it really been nearly three months since my last post?  HOW did that happen?  We’ve been neck deep in personal drama, writer angst, and WORK WORK WORK!  There are a few things that we need to update everyone on.

First, Dani Hermit is taking over the main cover design duties.  For personal reasons, Nevi Star is taking an extended sabbatical from doing professional art.  So, after much discussion we have decided that she can work on the art for the Parliament of Twilight at the pace that suits her.  We will be releasing 2 versions of the books.  The first will be the “regular” editions and they will come out much faster.  Dani will be doing the covers using her mad photoshop & digital art skills.  When Nevi’s art is completed and formatted, the “special edition” with illustrations and hand drawn covers will be released.

Both versions will be available in eBook and paperback, though we are still discussing only having the illustrated versions done in paperback since they don’t look as nice in eBook version.  Haven’t made any choices on that front yet, but we will keep you updated.

What that means for you, the fans, is that the Episodes will be able to be released a little bit faster and a little bit cheaper!  Episode one is available right now on Lulu.com in paperback!  The eBook is taking a little longer to get formatted but I will post the links the moment that they are live and working. 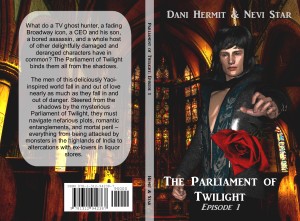 In personal news, we lost our baby kitty Owen just before Christmas.  We are still broken hearted over this loss and were depressed for quite a while.  But fate brought two new kitties who needed a loving home across our path a few weeks ago.  Khoshekh and Erika are adapting quite nicely to being pampered princesses and we are adapting to being a two cat household.  It’s still surprising for me to leave one room where I was petting a kitty to find another cat waiting for love and attention!

Nevi and I are working on finishing up the final scenes for Episode 3.  We’re already excited to begin the plotting for Ep 4!  The editing and formatting on Episode 2 are only a couple weeks from being done.  Less if they aren’t as demanding as the ones for Ep 1 were.

We are working (very casually) on a couple side projects that we are hoping will see the light of day later this year, but for the most part we are focusing on writing and publishing the Parliament of Twilight books.

That about covers it.  Sorry for the rambling!  And thank you to everyone who has been supporting us through this confusing, heart-breaking, insane, amazing journey!